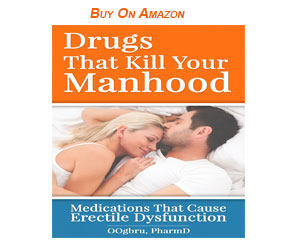 Erectile dysfunction is “the consistent or recurrent inability to achieve or sustain an erection of sufficient rigidity and duration for sexual intercourse”.

Many commonly prescribed medications list erectile dysfunction as a side effect. Examples of medications that disrupt normal male sexual function include antipsychotics, antidepressants and antihypertensives. Treatment options for drug-induced male sexual dysfunction include decreasing the dosage of the offending drug or replacing it with another agent with no sexual adverse effect when possible. If these measures fail, therapies for erectile dysfunction such as Viagra and similar medications, yohimbine tablets, and vacuum pump devices are used.

Learn More About Drugs That Cause Erectile Dysfunction

Antipsychotics are used to treat mental disorders such as schizophrenia, bipolar disorder, depression, and personality disorders. Sexual dysfunction is a common condition in patients taking antipsychotics, resulting in a decrease in medication adherence.

The first generation or typical antipsychotics include chlorpromazine (Thorazine), fluphenazine (Prolixin), haloperidol (Haldol), mesoridazine (Serentil), thioridazine (Mellaril), thiothixene (Navane) and trifluoperazine (Stelazine). Amongst the first generation antipsychotics, thioridazine (Mellaril) is associated with the highest risk of erectile dysfunction with up to 60% incidence reported.

Spironolactone (Aldactone) is a potassium-sparing diuretic used for treating high blood pressure and it is associated with ED. The reported rate of ED is 4% to 30% in patients using spironolactone.

Thiazide diuretics are another class of drug used to treat high blood pressure and edema (fluid build up). Erectile dysfunction has been reported in 10% to 20% of patients taking this class of drugs. Loop diuretics such as furosemide or torsemide have a lower risk of ED.

Anticonvulsants are widely used as long-term adjunctive therapy or as monotherapy for seizure treatment. Anticonvulsants that increase the activity of liver enzyme may alter sex hormone metabolism, which may cause ED in patients. Patients should consider switching to an anticonvulsant that does not affect liver enzymes that breakdown sex hormones.

Learn More About Drugs That Cause Erectile Dysfunction

Testosterone Injections and Risk of Heart Attacks, Stroke, and Death