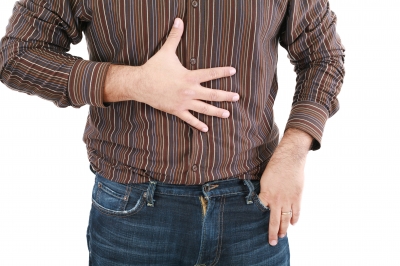 Patients with ulcers may have dyspepsia (indigestion), stomach pain, bloating (feeling of stomach fullness), heartburn or nausea. Another symptom of ulcers is bleeding, which may happen slowly over time or quickly. Slow bleeding may produce no signs and may eventually lead to anemia. Fast bleeding may be seen in the stool as a dark red or black and tarry substance known as melena. Severe ulcers may also cause vomiting of blood which looks like coffee grounds. This is a medical emergency and patients should seek immediate medical attention if this occurs.

One of the main causes of ulcers is taking medications such as NSAIDs (non-steroidal anti-inflammatory drugs). NSAIDs are drugs that are used to treat pain, for example ibuprofen (Motrin, Advil) and naproxen (Aleve, Naprosyn). NSAIDs stop production of enzymes that normally protect the stomach lining. The risk for getting NSAID-induced ulcers increases if NSAIDs are taken at a high dose or for a long period of time.

Another main cause of ulcers is an infection with H-pylori (Helicobacter pylori) bacteria in the stomach. H-pylori can increase the risk of developing ulcers. It causes about 80% of gastric ulcers and 90% of duodenal ulcers. If H-pylori is detected in a patient with ulcers it should be treated.  Treatment usually comprises of a combination of antibiotics and a stomach acid suppressant such as omeprazole.

Other less common causes of ulcers include Zollinger-Ellison Syndrome (over-production of gastric acid), cancer and chemotherapy.