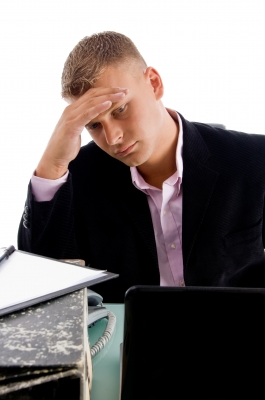 Drug-induced depression is defined as a prominent and persistent disturbance of mood that occurs within one month of use of a medication. Patients may experience disturbances in both social and work settings and may have difficulty functioning in day-to-day life. Drug-induced depression has been associated with many drugs. These include cardiovascular agents, antidepressants, hormonal agents and immunologic treatments. These medications are believed to alter the concentration of neurotransmitters (molecules that transmit signals) in the brain. These neurotransmitters (for example, serotonin, dopamine, norepinephrine) are responsible for maintaining mood. When the levels of these neurotransmitters are not balanced, depression occurs.

The following is a list of drug types that are associated with depression and how they cause depression. Next to the drug names are letters indicating the quality of evidence from which these conclusions have been drawn. The evidence levels are as follows:

Level A – There is evidence that this medication causes depression from one or more excellent quality controlled clinical trials.

Level B – There is evidence that this medication causes depression from various types of fair-quality trials.

Level C – There is evidence that this medication causes depression from one or more specific case report.

Efavirenz – (Level of Evidence: A)

Efavirenz is a non-nucleoside reverse transcriptase inhibitor (NNRTI) used to treat patients infected with human immunodeficiency virus (HIV). Efavirenz is associated with the development of depression, however, the mechanism for causing depression is unknown. In over 1,000 patients who used this medication for an average duration of 1.6 years, 1.6% developed major depression with suicidal ideation (ideas of suicide) occurring in 0.6%. When considering patients who had a previous history of psychiatric disorder, the risk of depression and suicidal ideation rose to 2%. The data suggests that treatment longer than 6 months with Efavirenz increased the risk of developing depression five times greater in patients who had high blood levels of the drug (more than 2.74 micrograms per liter).