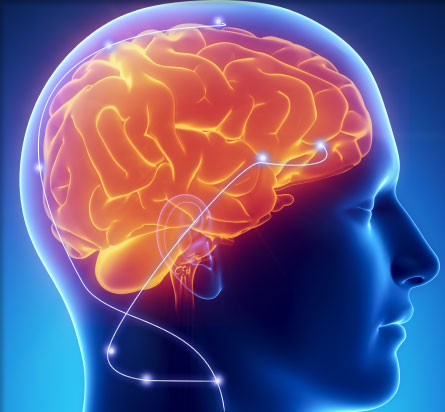 On June 12, 2015 the FDA approved the Brio Neurostimulation System for reducing symptoms of Parkinson’s disease and essential tremor. It is manufactured by St. Jude Medical in St. Paul, Minnesota. The Brio Neurostimulation System is an implantable deep brain stimulation (DBS) device used to reduce neurological symptoms such as tremors, rigidity, stiffness, slowed movement, walking problems, and dystonia (muscle spasm and abnormal posture). DBS is recommended for patients with partial response to medication therapy. Patients who failed medication therapy may not benefit from DBS.

The DBS has a a small (1.9 in x 2.1 in x 0.4 in) battery-powered, pulse generator (IPG) implanted under the skin of the upper chest and wire leads that attach to electrodes which are surgically implanted into the thalamus and other areas of the brain that control movement. The IPG system continously delivers electronic signals to control movement. Unlike other surgical interventions, permanent surgical changes to the brain are small. If the device causes adverse effects or is no longer preferred, the IPG can be removed. If the patient’s condition changes, the IPG can be adjusted without additional surgeries.

This is the second device approved for these diseases. Medtronic’s Activa Deep Brain Stimulation Therapy System was approved in 1997 for tremors associated with essential tremor and Parkinson’s disease. The Brio Neurostimulation System has additional indication for non-tremor symptoms in Parkinson’s disease. The Brio Neurostimulation System is a new treatment option for patients who partially respond to medication therapy and may be used to improve therapeutic outcomes, reduce medical costs, and improve patient’s quality of life.

Parkinson’s disease is a brain disorder that causes tremors, rigidity, bradykinesia (slowed movement), or postural and coordination instability. It affects neurons in the regions of the brain that coordinate movement. About 7 to 10 million people worldwide are living with Parkinson’s disease, with approximately 50,000 Americans diagnosed with the disease each year. The average medication cost for a patient is approximately $2,500 per year and surgical intervention may add an additional $100,000.

DBS may help reduce Parkinson’s disease symptoms through various mechanisms. High-frequency stimulation (HFS) applied to the brain may alter the release of neurotransmitters. This produces both local and network effects. Local effects include either inhibiting or activating specific neurons that regulate movement. Network effects include activating astrocytes which are neuronal cells that control acitivity at nerve synapsis and provide neuroprotection.

In a recent study conducted by the St. Jude Medical Study Group, patients were randomized to receive an inactivated device or DBS. Clinical response was defined as time without dyskinesia (impaired movement) or with non-bothersome dyskinesia. After 3 months, 73.3% of patients in the DBS group compared to 38.2% in the placebo group responded. DBS was effective in controlling Parkinson's disease symptoms.

Essential tremor is the most common type of abnormal tremor. Essential tremor primarily affects the hands although it may also involve the head, voice, tongue, legs, and trunk. It causes rhythmic shaking of the affected area. Although the exact cause is unknown, it is a brain disorder and may be associated with lesions or degeneration of the cerebellum, a region of the brain that controls movement. Recent evidence suggest that essential tremor is a progressive disorder. It causes postural instability, abnormal gait in late stage disease, memory impairment, cognitive impairment, sensory abnormalities, and psychiatric changes. Although the disease may be less severe and often mistaken for Parkinson’s disease, essential tremor is more common and estimated to affect 10 million Americans and even more worldwide. DBS is highly effective at reducing tremor, however, it may impair control of reaching movements.

In the North American Multi-center Trial, 25 ET patients were followed for one year and received either the “on” or “off” stimulation. On the combined blinded tremor rating scale (0-4, 4 indicating severe tremor), patients in the “on” group reported 0.9 on the scale compared to 2.7 in the “off” group. In addition, 31% of patients from the “on” group had complete tremor cessation.

In another study, 34 patients received thalamic stimulation. There was an 80.4% improvement in tremor and 69.7% improvement in handwriting. Both studies reported development of tolerance to DBS, however, this may be associated with disease progression.